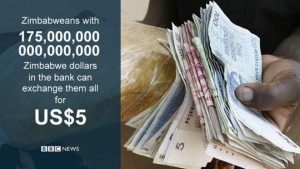 Zimbabwe is phasing out its local currency, the central bank says, formalising a multi-currency system introduced during hyper-inflation. Foreign currencies like the US dollar and South African rand have been used for most transactions since 2009. BBC reports:

Local dollars are not used except high-denomination notes sold as souvenirs. But from Monday, Zimbabweans can exchange bank accounts of up to 175 quadrillion (175,000,000,000,000,000) Zimbabwean dollars for five US dollars. Higher balances will be exchanged at a rate of Z$35 quadrillion to US$1.

The move has been “pending and long outstanding,” central bank Governor John Mangudya said, quoted by Bloomberg. “We cannot have two legal currency systems. We need therefore to safeguard the integrity of the multiple-currency system or dollarization in Zimbabwe.” Zimbabweans have until the end of September to exchange their local dollars.

Correspondents say this is likely to only affect those with savings accounts.  Hyper-inflation saw prices in shops change several times a day, severe shortages of basic goods and Zimbabweans taking their money to market in wheelbarrows. Ahead of the abandonment of the Zimbabwean dollar in January 2009, officials gave up on reporting official inflation statistics.