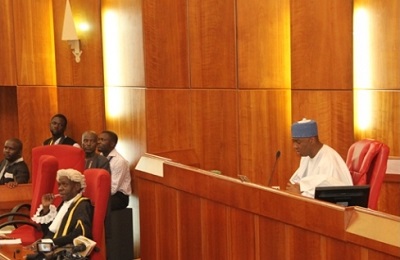 The Senator representing Zamfara Central, Kabiru Marafa, has declared that any activity carried out by the 8th Senate will amount to an exercise in futility because it was not properly and legally constituted to conduct legislative business.

The All Progressives Congress Senator, who made this known in a telephone interview with Daily Trust Saturday, said that as far as he and other senators of the Unity Forum were concerned, the Senate as currently constituted, lacks constitutional powers to conduct legislative or any other function it has.

The Senate President, Dr. Abubakar Bukola Saraki, who emerged on June 9 in controversial circumstances, had on Wednesday through Clerk to the National Assembly, Salisu Maikasuwa, summoned the Permanent Secretary in the Ministry of Finance to appear and brief him on the state of the economy.

But the Perm Sec, Mrs. Anastasia Mabi Daniel-Nwaobia, was said to have shunned the invitation for lack of clearance from the Presidency, a development that made the clerk to reply that “I refer to our letter Ref. No. NASS/S//SP/ COS/CORRP/15/1/06 of June 29, 2015 on the above subject matter and your text message of July 7, 2015  to the Chief of Staff to the Senate President, signifying your inability to honour the invitation.

“Your action is a deliberate violation of the provisions of Section 67(2) of the Constitution of the Federal Republic of Nigeria, 1999(as amended). You are, therefore, requested to appear before the Senate leadership as contained in your aforementioned letter on Wednesday July 8, 2015 at 2.00pm prompt”.

However, when contacted to comment on the matter, Senator Marafa said: “Yes, I read with open mouth amazement the letter written by both Chief of Staff to the Senate president and clerk to the National Assembly on the refusal or inability of a government functionary to honour the invitation of the ‘leadership’ of the Senate, saying the refusal violates section 67(2) of the constitution of the Federal Republic of Nigeria.

“Can somebody please tell them that they are guilty of similar if not higher offence? They in fact not only violated the constitution to ascend to the Senate leadership, they murdered section 60 of the constitution that gives the Senate and not any individual or group of persons, the powers to regulate its own procedure by fraudulently forging the Senate Standing Order, 2015 as amended and going ahead to conduct the business of the Senate on the 9th of June 2015, using the forged document”.