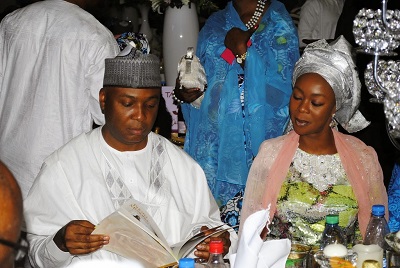 Senators loyal to the Senate President, Dr. Bukola Saraki, under the aegis of “Like Mind Senators” on Thursday faulted the invitation of his wife, Toyin, by the Economic and Financial Crimes Commissions over alleged corruption, saying the invitation may be politically-motivated.

The group, in a statement said it found the decision of the anti-graft agency to invite Mrs. Saraki in connection with an unknown investigation “very curious”.

Mrs. Saraki, who was first lady of Kwara State from 2003 to 2011, is reportedly being invited by the EFCC in connection with certain questionable financial inflows into the accounts of some companies she has interests in.

She is billed to appear before the Commission on July 28, and has indicated her willingness to cooperate with it.

Her husband has been enmeshed in a long-drawn political battle with the leadership of his party, All Progressives Congress, over his emergence as President of the Senate on June 9.

The group of senators in the statement signed by Dino Melaye (Kogi West) said it “hoped that the invitation of Mrs Saraki was not politically motivated or linked with the on-going leadership tussle in the Senate”.

The Like Mind Senators noted that the decision of the EFCC to invite the former Kwara first coincided with the ongoing National Assembly leadership crisis, thereby making the timing suspicious and difficult to ignore.

“Though, we do not want to make any hasty conclusion, we are surprised that about five years after the Sarakis left Government House, Ilorin, the EFCC suddenly realized the need to invite the wife. We hope this is not part of the plot we have heard about aimed at wrestling the Senate President down with different tactics”, the statement said.

“We have heard some of our colleagues and their sponsors boasting about throwing all types of mud at the leadership of the Senate in the bid to force it to accept their conditions.

“The EFCC definitely should perform its lawful duties but we warn that it should not return us to the dark days when the anti-graft agency was frequently and flagrantly used as a political weapon”, the lawmakers said.

The group said its members would continue to watch closely developments around the senate president’s invitation and make its position known to members of the public.