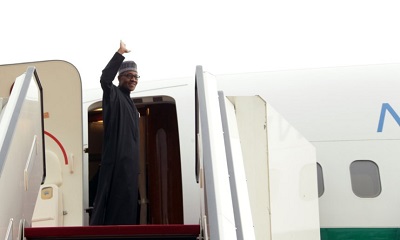 President Muhammadu Buhari would be accompanied by five State Governors including those of Oyo State, Imo State, Edo State and two others when he travels to Washington, DC United States of America on July 19, 2015 to meet President Barack Obama.
According to SaharaReporters, the five Governors are separate from an 18-man presidential entourage that includes top aides and political associates of the President, immediate past Governor of Rivers State, Rotimi Amaechi; the former Vice Presidential candidate to Buhari in the 2011 presidential poll, Tunde Bakare, and former member of the House of Representatives, Farouk Adamu.
In addition to these delegates, it was learnt that President Buhari will bring along top civil servants, representatives from the Office of the National Security Adviser, and representatives from economic policy and foreign affairs think tanks.
The three-day visit, which is on the invitation of President Barack Obama, is expected to discuss ways of partnering with Nigeria to defeat Boko Haram and explore avenues of combating corruption in Nigeria.
President Buhari will be received at the White House by President Obama on July 20th.