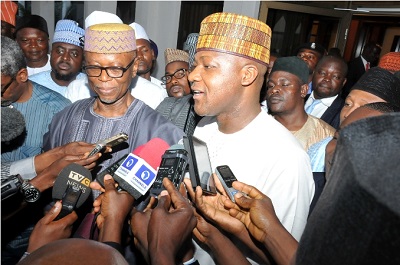 The All Progressives Congress on Tuesday expressed regret over the leadership crisis in the National Assembly just as it commended the Speaker of the House of Representatives, Yakubu Dogara, and his colleagues for what it called their sense of patriotism in their handling of the situation in the House.
The National Chairman of APC, Chief John Odigie-Oyegun, said this at the party’s headquarters in Abuja.

According to him, though the governing party was unhappy with the crisis, the issues at stake are part of the country’s growing democracy.

Odigie-Oyegun said, “I want to commend the Speaker and his colleagues for their sense of patriotism. It is my hope and expectation that the wounds will now be totally healed and the APC family will now reunite fully as one”.

To Nigerians, he said, “I have already offered our regrets. This is part of growing. We are new in government and we are a democratic and progressive movement.

“We are in the process of welding all the various tendencies into one and today we have scored one major victory and I can assure the country that the party has begun the process of healing all the wounds and becoming one strong force.

“We are moving from being a movement to being a strong political party that will back the President for the good of the entire country”.

On the Senate crisis, Odigie-Oyegun said, “The Senate is a different level and a different situation. I think the way we are going to handle the situation will be totally different. But at the end of the day even the Senate issue will be sorted out too”.