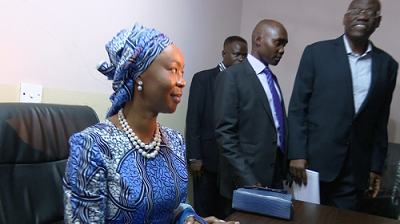 The All Progressives Congress has washed its hands off the ongoing interrogation of the wife of the Senate President, Mrs. Toyin Saraki, by the Economic and Financial Crimes Commission.

The National Chairman of the party, Chief John Odigie-Oyegun, stated this while fielding questions from reporters in Abuja at the party’s headquarters, Wednesday.

Mr. Odigie-Oyegun noted that unlike the previous administration, the President Muhammadu Buhari-led APC administration had taken a position of non-interference in the activities of agencies of government saddled with investigative and prosecution responsibilities.

He was reacting to allegations that the party was behind the renewed interest of the EFCC in the Saraki case.

“We are totally, completely innocent of this. We absolutely have nothing to do with it. She is not on trial by the way- it is an investigation that has to do with the Senate President’s wife.

“There were insinuations that this could have been triggered by the opposition party itself, and the PDP itself asked its branch in Kwara State to make a denial that they were not the originators of the petition or whatever triggered this thing.

“What we have not done is like in the PDP days, rush and interfere with the processes of the EFCC which our President has said quite clearly; everybody should be allowed to carry out his legitimate function without interference. The EFCC is doing what it feels it needs to do”, he explained.

On the decision of President Buhari to limit his probe to the Jonathan administration, the APC helmsman said anyone in the president’s shoes could have done the same.

This, he said, was because the level of impunity with which corruption took place under the last administration was simply phenomenal and could not be wished away.

Odigie-Oyegun also gave credit to Buhari, who he said brought presidential prestige to bear to resolve the crisis in the House of Representatives.

He explained that President Buhari intervened without necessarily interfering.

According to him, all the president did was to reiterate his earlier position that under the prevailing democracy, the political party is supreme.

Odigie-Oyegun noted that the president also made it quite clear that all party members must remember and remain respectful to the platform which he/she used to get to power and must not do things that would bring the party into disrepute.