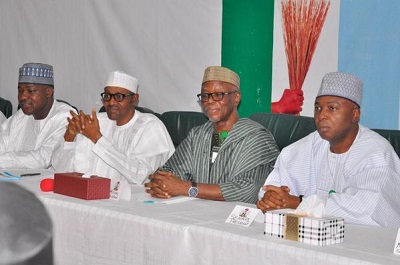 The All Progressives Congress (APC) has denied a report making the rounds online that it is displeased with the appointments made so far by President Muhammadu Buhari, and that it has rejected the election of Bukola Saraki and Yakubu Dogara as Senate President and Speaker of the House of Representatives respectively.

In a statement signed by Joe Igbokwe, the APC Publicity Secretary in Lagos yesterday, the party pointed out that South West APC Chairmen never met anywhere in the South West nor issued the purported statement credited to them.

“We consider it potentially dangerous and unacceptable that some persons or group of persons will resort to this type of petty politics either to entertain themselves or to create further divisions within the APC family,” it said, noting that while there are some issues to resolve at the National Assembly, it will not pull down a solid house that has been built together.

“Consequently, we want to warn these mischief makers to desist from this ugly act that was framed in the first place to heat the polity and further embarrass the leadership of the party nationwide. This is the handwork of the enemies of our great party and they will fail at the fullness of time”, the Lagos APC spokesperson said.

Mr. Igbokwe also appealed to APC leaders and supporters in the South West and throughout Nigeria to be calm and to believe strongly that the dust raised by the National Assembly issues will soon be a thing of the past and that the party will bounce back stronger, solid and more united.