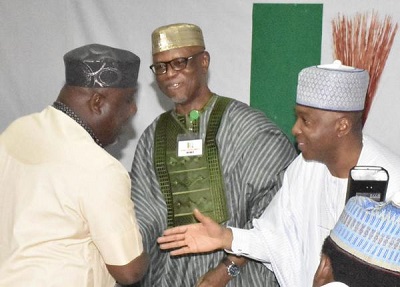 The leadership cri­sis rocking the National Assem­bly has been declared over by All Progressives Congress (APC) gover­nors.

Speaking after a mara­thon meeting on Friday between the governors and all the parties involved in the National Assembly crisis, Imo State Gover­nor and Chairman of APC Governors’ Forum Rochas Okorocha, said the parties have agreed to work together.

It was the first time all the factions in­volved in the National As­sembly crisis would meet since the crisis broke out.

Addressing journalists shortly after the parley, elated Okorocha said, “We are aware that the nation has been waiting patient­ly for the outcome of this peace move. I am happy to announce to all of you that peace at the National As­sembly is at sight. We have had discussion and we have all agreed to accept peace, so you will not see any more disagreements as in the past. Peace has returned to our party.

“Both the Senate Presi­dent, the Speaker, Senator Ahmed Lawan and Hon. Femi Gbajabiamila will work together for the unity of the National Assembly and the progress of our par­ty. By next week, we will give you the details of this our peace arrangement but so far, so good”.

A Rep mem­ber, who was at the meet­ing, claimed that it was agreed that Gbajabiamila, who was the APC consensus candidate for the position of Speaker, will be named the Major­ity Leader.

“Some concessions were made by the parties. What is certain as regards the House is that Gbajabiamila will be the Majority Leader”, he said.