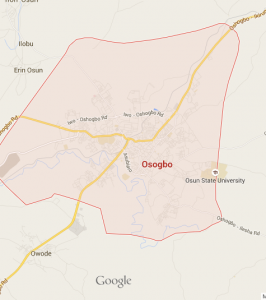 Osogbo, the peaceful capital of Osun State is turning into a land of chaos as thugs have attacked peaceful protesters twice in three days. The protesters are calling for the impeachment of Governor Rauf Aregbesola after seven months of unpaid salaries crippled the economy of the state.

The fresh attack occurred, Thursday, at a popular news stand at Makson Junction, opposite old Governor’s Office, Osogbo. The thugs numbering about 25 stormed the place in six mini-buses and with all kinds of arms such as guns, axes and cudgels started chasing and beating up anyone at sight.

The attackers were suspected to be those sympathetic to Governor Rauf Aregbesola. Suspicions on this were slightly confirmed when the ever vocal director of Publicity and Strategy for the All Progressives Congress (APC), Mr Kunle Oyatomi said the party has decided not to comment on the issue.

In the same vein, Aregbesola’s Director of media and publicity, Mr Semiu Okanlawon refused to pick several calls put across to him for his comment by Vanguard. He also refused to reply the text message.

A vendor, Mr Kazeem Madamidola, who is a vicitm of the attack said that the hoodlums accused people around the area of being anti-Aregbesola and that those gathering to read newspapers at the news-stand were said to be speaking against the governor.

“The thugs pulled down my news-stand, tore all the newspapers and started beating people up. They accused them of booing Aregbesola during the rally on Tuesday and threatened that by today, they will kill anyone who comes around here,” he said.

Following the incident, the Civil Societies Coalition for Emancipation of Osun State (CSCEO) has urged President Muhammadu Buhari to call Aregbesola to order, saying the governor’s plan was to create an atmosphere of fear in the state.

The group’s Chairman, Comrade Adeniyi Alimi Sulaiman stated, “We condemn this unprovoked attack because attacking innocent citizens of our state cannot solve the problems on ground. This is democracy and every Nigerian has the right to freedom of speech as guaranteed by the 1999 constitution.

“The whole world is aware of Aregbesola’s unpopularity in the state. His plan is to keep peoples’ mouths shut and create an atmosphere of fear so as to put us in perpetual bondage.”

He warned Aregbesola to desist from his despotic rule and face the enormous challenges before the state while calling on the state House of Assembly to intensify its probe of Aregbesola’s government.