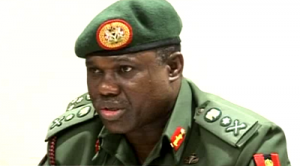 Minimah said this following renewed bombings and attacks in markets, places of worship and other public places mostly in northern Nigeria. He spoke to reporters at the opening of the Chief of Army Staff Second Quarter Conference in Abuja shortly before he was replaced by President Muhammadu Buhari.

“We will at this conference re-examine the state of ‘Operation Zaman Lafiya,’ so as to add more impetus to our offensive into the remaining enclaves and camps of the terrorists,” he said.

“Today their ability to face our gallant troops in any form of combat has been seriously degraded which has resulted to their new tactics of attacking innocent and vulnerable citizens in markets, places of worship and other areas.

“As we review our activities for the second quarter, we will be mindful of our operations in the North-East in view of the change of tactics by the insurgents.”

Minimah said that Nigerian troops had taken full control of Sambisa Forest, assuring that the military would sustain the momentum until all known enclaves of the terrorists were destroyed.

Minimah was sacked yesterday by President Buhari and was replaced with Major-General T.Y. Buratai. The other service chiefs were also sacked and their replacements were announced.