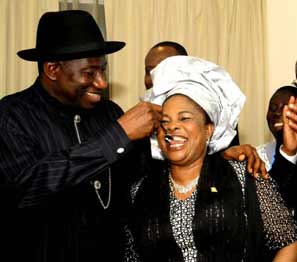 Chairman of the All Progressives Congress in Bayelsa State, Perekeme Kpodo, has urged President Muhammadu Buhari to prosecute former President Goodluck Jonathan and his wife, Dame Patience.
The APC chair, who made the call at a news conference in Yenagoa on Wednesday, said Jonathan, his wife and known associates, should be prosecuted for the alleged looting of resources of the country and other associated crimes.
Mr. Kpodo, who was the interim chairman of the New Peoples Democratic Party, said the acceptance of defectors to the APC by the Tiwei Orunimighe-led executive committee was an illegal action.
He said it was an action to provide cover for band of corrupt politicians and give protection against prosecution by Mr. Buhari.
According to him, the APC’s stance against corrupt associates of the administration of Mr. Jonathan was established as such they must be prosecuted.
“As a decent state executive, we consider the attempt to make the APC a dumping ground unacceptable.
“APC in the state will not allow the party to become a dumping ground for desperate looters and thieves in need of protection from prosecution.
“We call on President Muhammadu Buhari to order a detailed investigation into the acts of fraud and embezzlement by these defectors and their associates.
“We support the moves by Buhari for the prosecution of former President Goodluck Jonathan, his wife, Patience Jonathan and his known associates for the looting and associated crimes committed against the state”, Mr. Kpodo said.
He also advised potential defectors to obtain clearance at the ward through to the state level of the party, saying they must also show clear record of performance from the parent party before official presentation to the loyalists and progressive supporters of the APC.
.Mr. Kpodo further said the APC would soon release a timetable of events of the party to receive its teeming supporters, defectors and that the processes for primary election of the party.