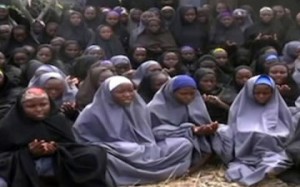 Boko Haram is offering to free more than 200 young girls kidnapped from their school in Chibok, Borno State, last year, in exchange for the release of militant leaders held by the federal government.

An activist Fred Eno, who said he had been negotiating with the sect for one year, noted that Boko Haram’s current offer was limited to the Chibok schoolgirls.

“The new initiative reopens an offer made last year to the government of former President Goodluck Jonathan to release the 219 students in exchange for 16 Boko Haram detainees,” the activist was quoted by the Associated Press (AP) to have said.

Presidential adviser Femi Adesina, however, stated that theMuhammadu Buhari-led government “will not be averse” to talks with Boko Haram.

Talks had been initiated during the tenure of Goodluck Jonathan but Eno noted that the poor advice of the different security agencies to him truncated the negotiation.