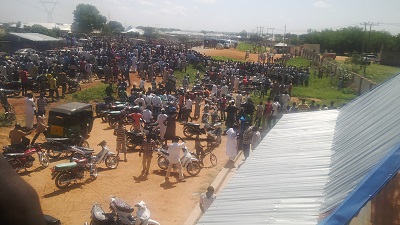 Multiple bombs went off around 9am at the Sabon Gari Local Government Secretariat of Kaduna State on Tuesday morning killing 20 persons.

The explosion came less than 24hrs after a suicide bomber blew herself up near a mosque in Kano and two days after 42 people were killed in multiple bomb blasts in Jos, Plateau State and six in Potiskum, Yobe State.

Our correspondent at the scene shortly after the blast occurred learnt that two female suicide bombers carried out the dastardly act and most of the victims were primary school teachers and other public officials, who were undergoing the verification exercise ordered by the Kaduna State Government.

Meanwhile, Governor Nasir El-rufai has visited the Local Government Secretariat. He, however, left after spending about 15 minutes.