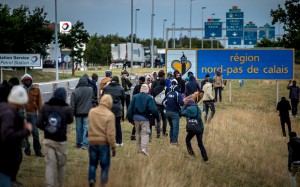 Britain will not become a “safe haven” for migrants in Calais, David Cameron has warned, after hundreds continued their attempts to reach the UK. The prime minister warned illegal immigrants would be removed from the UK, as migrants told the BBC they remained determined to reach Britain.

According to the BBC, Mr Cameron was speaking after people gathered for a third night at fencing at the Channel Tunnel freight terminal. Over 3,500 attempts have been made this week to get into the tunnel terminal.

Several hundred migrants were escorted away from the terminal by French police on Wednesday night – the third night of large-scale attempts to storm the terminal. As night fell, the road towards the Channel Tunnel started to come alive. Groups of 10 or 12 migrants, moving steadily along the darkened highway, jackets pulled close, hoods up.

After a day of discussion in Paris and London over how to secure the tunnel, and fresh deployments of riot police, the determination of Calais’ migrants seems unchanged.