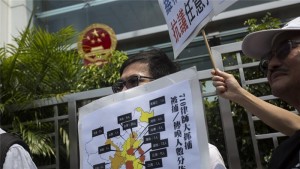 The director of a high-profile law firm in Beijing has pleaded guilty to disorder charges, marking a 10-day government crackdown on human rights lawyers and activists. Since July 9, more than 200 lawyers and activists have been targeted in what Amnesty International called an “unprecedented” spree of detentions and police questioning. Aljazeera has more:

Director Zhou Shifeng of Fengrui Law Firm faced charges alongside nine lawyers and four staff members at his firm, which has taken on politically sensitive cases for clients like Uighur dissident Ilham Thoti.  Deemed a “criminal gang” by state-run newspaper The People’s Daily, the group faced a range of charges, including inciting disorder and disrupting trial proceedings.

The People’s Daily also accused the group of organising protests to stoke support for their cases, reporting that suspects have since admitted to exaggerating and politicising their cases.

Throughout the country, a wide sweep of around 200 lawyers, activists and bloggers have been detained or questioned by police since July 9. As of Friday, Amnesty International said that 24 people were still feared to be missing or in police custody.