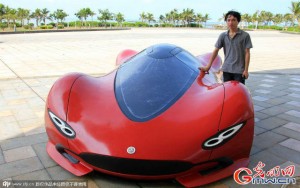 Chen Yinxi, a 27-year-old motorist from China, stole the show at the 2015 Hainan International Automotive Industry Exhibition, last week, with an impressive-looking futuristic supercar he built by himself, from scratch.

Chen’s homemade sports car stunned visitors at the Hainan auto show. Most of them couldn’t believe this masterpiece of automotive design was created by just one man, at home, for only 30,000 yuan ($4,800). The 27-year-old ambitious car builder worked on his jewel every day, for five months, before unveiling it to the public, but people’s positive reactions have made all his hard work worth it.

He worked hard to finish the exterior by July 10th, so he could showcase it at the Hainan International Automotive Industry Exhibition, but he still has much work to do on the interior and under the hood. Although his red sports car looks like it could give Ferrari or Lamborghini a run for their money, Chen says it will only have a maximum top speed of 60 miles per hour, but won’t be road legal.