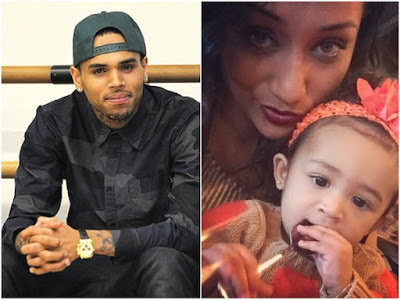 Chris Brown who has been spending so much time with his daughter Royalty, says he has had it with his baby mama Nia Guzman’s child support and custody demands, so he’s asking a judge to intervene.

Chris and Nia have been at war over 1-year-old Royalty for a long time now. She’s demanding $15k a month in child support, but Chris Brown doesn’t think it is a fair amount.

Due to this reason, he has filed legal documents in Houston to establish paternity of baby Royalty. That will give him the right to fight Nia over support and custody.

Chis who has been paying Nia $2,500  per month, believes it is a fair amount. If he ascertains that he is Royalty’s father, he will then go to court to file for custody and a fair amount for child support to Nia.
He says Nia has been denying him the right to see his daughter, so he wants a judge to get involved and set guidelines for both of them