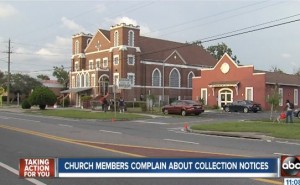 A Florida church concerned about the failure of one of its young female members to pay a monthly financial contribution to its operations has threatened to strip her from its roll if she doesn’t pay up and has offered her a grace period of 90 days to make nice if she is experiencing financial “hardship.” The threat to “Candance Petterson” as the young woman is identified in a letter posted to Facebook, came from the more than century old Greater Mount Moriah Primitive Baptist Church in Tampa, Florida, according to church member Bonnie Maxwell. Read more from Scoop:

The young woman who posted the letter to her Facebook profile Pretty Peterson on Saturday said she was surprised that the church would insist that she owed them anything since no one even bothered to call her to find out how she was doing even though she had not been attending the church for a while. “What Church does this … why would I want to go to a church that everybody talk about everybody. … Christ don’t have nothing to do with this paper you typed. … They said I owe a fee for not coming to church. … I just haven’t been back to that church. … If I’m such a member why no one called to check on me,” wrote Peterson.

“In sending this letter, it is with much regret. We value you as a member of our congregation and your attendance in the worship services. You are currently delinquent in your financial support,” said the letter which then highlights what appears to be church rules noting that “anytime a member fails to contribute the minimum assessed amount for three or more months in the year [they] become a delinquent member.” Then came the gentle threat: “In order to not be removed from the church roll, your attention to this matter [is] greatly appreciated.”