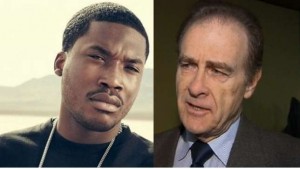 It’s quite cute and funny how the city of Toronto – Canada, is always quick to have Drake’s back when someone goes after him.

Seems like Meek Milly won’t be setting foot into Toronto any time soon as at July 22, he’s been banned entry into the great Canadian city.

The Councilor of Toronto, Norm Kelly has just tweeted that Mill is not welcomed into Toronto.

Meek Mill, who has since deleted photos of his girlfriend, Nicki Minaj from his Instagram – slammed Drake for not writing his own lyrics.

He claimed Drake didn’t write the verse he dropped on his popular hit song, R.I.C.O.

Meek Mill also accused the Canadian rapper of not tweeting the link to the song they did together; not like they had an agreement that Drake was supposed to.

Some fans also claim Mill thinks Drake had a secret affair with his GF, Nicki and used it on the verse on R.I.C.O. Drake rapped: ”The girl of your dreams to me is probably not a challenge’‘. Fans now believe Drake was referring to his affair with Meek’s GF (Nicki).