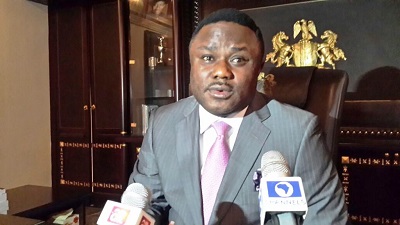 Governor Ben Ayade of Cross River State on Friday lampooned the United Nations and the Federal Government of Nigeria for ceding the oil-rich Bakassi Peninsular to the Repub¬lic of Cameroon without seeking the consent of the people through a plebiscite.
Ayade, who stated this while receiv¬ing the Country Representa¬tive of the United Nations High Commission for Refugees, UNHCR, Mrs. Angele Dikongue Atangana in his office in Calabar, said the people of the state were still angry over the ceding of the pen¬insular and no amount of money could wish their plight away.
The peninsular was ceded to Cameroon following the October 2002 judgment of the International Court of Justice (ICJ).
The governor noted that the ceding of the peninsular was done with¬out a plebiscite, thus un¬justly depriving the people of their ancestral home and turning them into refugees in their own land.
Ayade, who struggled to hold back emotions, said: “Your commission is undertaking a worthy and noble cause. I thank you for your humani¬tarian assistance and expres¬sion of emotion, but the people are angry in the way and manner they have been treated. They have been de¬prived of their heritage and livelihood”.
According to him: “The people of Bakassi were not given the opportu¬nity to choose where they would want to belong and I am telling the United Na¬tions that this is an unsettled issue and no amount of dol¬lars can settle the issue. The people have now been split between Cross River and Akwa Ibom as well as Ni¬geria and Cameroon. As the agony of the people contin¬ues, their plight cannot be wiped away by dollars”.
“Take it that the people feel very disturbed and un¬happy and if this had hap¬pened in any other part of the world, there would have been war today. This is totally unacceptable and is not done in the modern society. Today, Cross River is traversed by internally displaced persons, who are refugees in their own state”, he said.
Continuing, the governor said: “The displaced people of Bakassi are suffering and if United Nations had anything in mind, it should have started from there and if anything needed to be treated as an emergency, it is the Bakassi because the people live in such sub-human condition. The state will work hard to strengthen things and we will partner the commission to achieve its aims”.
Earlier, Mrs. Atangana had commended the Cross River State Government for accommo¬dating refugees from Cam¬eroon, stressing that the UNHCR was touched by the plight of the displaced per¬sons of Bakassi.
She added that while everything is being done to ensure the resettling of the Cameroonians in their country of origin, the com¬mission would collaborate with the state to make life comfortable for the people of Bakassi, who are presently inter¬nally displaced in the state.
Atangana pointed out that the Commission spent about $200,000 in the first half of 2013 and that it has worked out modalities to introduce vocational training for the people with the assistance of development partners as a means of giving the displaced persons a sense of livelihood.
She, however, cautioned against seeing the displaced Bakassi indigenes as stateless people but be recognized as citizens or nationals of Nigeria who are rightly settled in their moth¬erland.