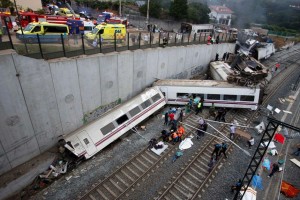 A 24-year-old driver was hurt and faces charges after authorities say she crashed her car onto train tracks and her vehicle was hit by a train. When paramedics attempted to help Jessica D. Barnes of Middletown, she told them “Don’t bother me, I’m drunk,” according to the Ohio State Highway Patrol. Fox19 was there:

Barnes is listed in serious condition with a head injury at Atrium Medical Center. She is on a police hold and under arrest on charges of operating a motor vehicle while under the influence of drugs and/or alcohol, failure to control her vehicle and not wearing a seatbelt.

Troopers say her 1995 Chevrolet S-10 pickup truck was westbound on Manchester Avenue west of University Boulevard when it drifted off the right side of the road about 10 p.m. The pickup hit a utility pole, disabling the vehicle on the train tracks.

She stayed in the passenger side of the truck. Meanwhile, a Norfolk Southern train traveling about 23 mph northbound toward her blew its horn several times, trying to alert her to get out of the way. But the conductor as unable to get her attention. The hit the truck, ejecting the woman out the open driver’s side door. She was thrown some 30 feet into a gravel pit.