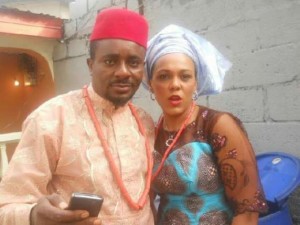 Outspoken controversial Nollywood star, Emeka Ike, who has been under fire since from fans has now sent a plea to his estranged wife to return home amidst reports of divorce.

Emeka Ike who is controversially claiming the presidential seat of the Actors Guild of Nigeria sent the plea in a recent interview.

‘…If my wife wants to leave me, she should have just said that it is due to irreconcilable differences and not that I am a wife beater. It would mean that she is trying to get unnecessary sympathy and I don’t think she would say such. When I showed my children what was on the internet, they were sad and said that it was a lie because I don’t beat their mother. I am a father of four children and I must protect them first before I even protect myself. That is why I would never say any bad thing about their mother. God would judge us all in life. Anyone who sees my wife should tell her to come back home to her children because they need her,’ he said.