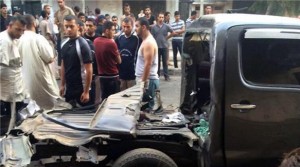 Al Jazeera’s Tamer Almisshal, reporting from Gaza, said that both of those wounded were civilians living in a house near one of the blast sites. Interior ministry spokesman Iyad al-Buzom released a brief statement in which he accused “vandals” seeking to destabilise Gaza of carrying out the explosions.

He said security officials started an investigation and would pursue the criminals. There was no immediate claim of responsibility for the attacks but an Al Jazeera correspondent in Gaza noted that Sheikh Radwan witnessed fighting between Hamas security forces and fighters loyal to the Islamic State of Iraq and the Levant (ISIL) group in early June.

ISIL threatened Hamas in a video shared online earlier this month, vowing to end the faction’s rule in the territory. Graffiti appearing to show an emblem used by ISIL could be seen behind one of the vehicles targeted in the attacks.