Home News Feed SHOCKING!!! Father Poisons His 41-Day-Old Baby In Order To Divorce Wife
Facebook
Twitter
WhatsApp
Last Friday at about 7 am, Kazeem Olajide allegedly poisoned his 41-day-old baby, Zainab Olajide, in a desperate attempt to divorce his wife. The incident happened at Toluwalase Estate, Ijoko-Abule, in the Lemode area of Ogun State. 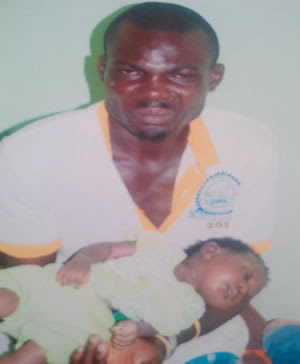 It was learnt that the mother, Abosede Ogundare, had left Zainab with Kazeem to sweep the compound only to come back and met the baby with foams gushing out from her mouth.

Ogundare alerted neighbours to the incident having found a bottle containing pesticide with her husband.
Zainab was said to have been rushed to a hospital in the community, where she eventually died.
It was also learnt that the suspect, who hails from Abeokuta, Ogun State, attempted to flee, but was held by residents, while the landlord of the house reported the case to the monarch of the community, Oba Solomon Sokunbi. The father was handed over to policemen at the Agbado Police Division after he confessed to the crime before the monarch.
A resident, who identified himself only as Biodun, said Kazeem had been threatening to divorce his wife before the baby’s untimely death.
He said:

“He doesn’t love the woman and has been trying to divorce her. He poisoned the innocent baby to actualise his mission. They recently moved to this estate. She was their only child.”

The landlord of the house, who wanted to remain anonymous, said the suspect had denied being Zainab’s father prior to the incident.
He said,

“Three days before the incident, Kazeem was looking for a pair of his slippers. When he did not find it on time, he started raining curses. I called him by his daughter’s name, and tried to caution him, but he warned me not to call him by her name again. It was when the incident happened that I realised he might have intentionally killed the child.”

Sokunbi, the Oba of Ijoko-Lemode, said Kazeem owned up to the act, claiming that he was pushed by the devil. He said he had been following the case to ensure that the suspect was brought to justice.
He said,

“It was the landlord who came to report the case to me and I directed my chiefs to bring him and the wife to the palace. I asked the husband and he confessed. He said it was the handiwork of the devil.

“I called the police from the Agbado Police Division to arrest him. They said he had been transferred to the state command headquarters. I have been following the case. This is a pure murder case and I want the police to duly prosecute the suspect and let him face the law.”

The monarch added that Kazeem’s wife told him in the presence of his chiefs that she saw the bottle with him two days before the incident.
He said:

“The woman thought the bottle contained herbs. She said she left the child with him to sweep the compound, only to return and met Zainab gasping and foaming in the mouth. She said she smelled pesticide in the baby’s mouth.”

The Ogun State Police Public Relations Officer, DSP Muyiwa Adejobi, confirmed that the case had been transferred to the command headquarters, adding that Zainab’s remains had been deposited in a mortuary.
Adejobi said,

“The corpse of the baby has been deposited in a mortuary. The case has been transferred to the Department of Criminal Investigation for further investigation.

“We have the suspect with us and he is going to be properly investigated. He and others found culpable in the course of our investigation will be charged to court.”