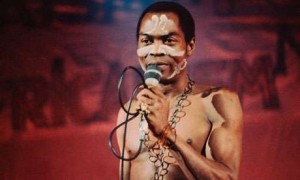 It’s good to know that the Nigerian legendary singer isn’t celebrated just in Nigeria but worldwide.

It’s about a month to the 18th remembrance of the Afrobeat legend, Fela Anikulapo Kuti, who died on August 2, 1997.

And this time, it’s from the Eighteenth congressional district of the state of Texas in the United States of America.

Sources say that Fela’s contribution to the world music and his creation of the Afrobeat genre, which has since become a force to reckon with in the world music, has been recognized by the state’s congress.

The late Afrobeat singer was honoured with the presentation of the Certificate of Congressional Recognition by the state’s congress to the family of the late singer.

Received by one of the sons of the late singer, Seun Kuti on July 1, 2015 during his U.S. tour that saw him perform in Houston in the last days of June 2015, members of the Kuti family have been singing praises of the late legendary singer for yet another honor in death.

Late Fela Kuti was born Olufela Olusegun Oludotun Ransome-Kuti on October 15, 1938 to a protestant minister and a political activist but died on August 2, 1997 after a brief illness.