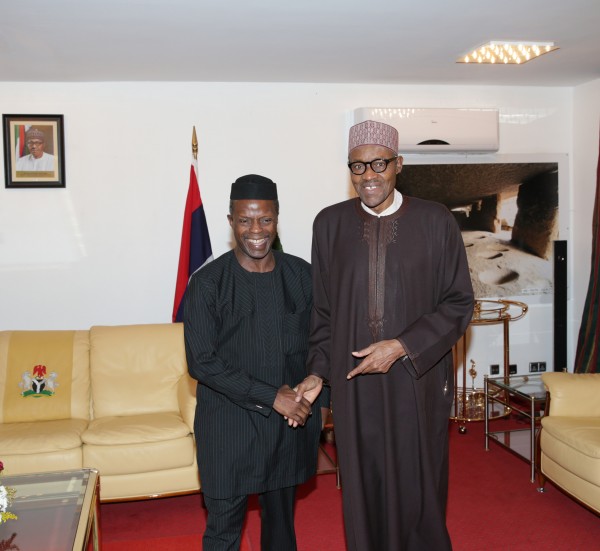 Vice President Yemi Osinbajo has described the Federal Government’s financial ‘bailout’ to states owing workers’ salaries as the product of President Muhammadu Buhari’s financial creativity.
Osinbajo, who spoke in Ibadan, the Oyo State capital on Saturday, said given the prevailing financial circumstances of the affected states and the plight of the workers, it was essential that any listening and sensitive government intervened in the way President Buhari did.
He said, “As you know, the Federal Government under President Buhari directed that three things should be done regarding the situation of the states in Nigeria. We know that the states were unable to pay salaries of their workers for many months. The first stage was the sum of money that was shared from the Nigeria Liquefied Natural Gas dividends and taxes, amounting to $2.1b.
“The second package is a loan which the states are allowed to access. The loans are concessionary in nature and any state that deserves it should have it. The third stage is the conversion of loans owed to commercial banks by the states to bonds. It is fairly complicated but simply put, the state and FG will work out how the loan will be repaid over an extended period of time. We are looking at 15 to 20-year period. Some have described this as bailout but what the President did is an extremely creative and compassionate way of giving relief to states as much as possible, given the financial circumstances they found themselves”.
The vice president also called on Nigerians to be vigilant in order not to prey of the violent antics of Boko Haram. He also used the opportunity to clarify his recent statement, which was misrepresented in the press on the plan by the insurgents to hit their targets using scavengers.
Meanwhile, Prof. Osinbajo has assured Nigerians that all things are going well in the Muhammadu Buhari-led government.
Speaking yesterday in an interview with journalists at the grand finale of the 25th coronation anniversary of the Akarigbo and paramount ruler of Remoland, Oba Adeniyi Sonariwo, in Sagamu, Ogun State, the vice president said, “All things are going well, things are going to get better and better. They (Nigerians) should be very hopeful. And we know that things are just going to get better and better”.
The vice president, who read the Yoruba version of his speech at the event, extolled the virtues of Oba Sonariwo, noting that the monarch had also been supportive of the federal, state and local governments.
On his part, Oba Sonariwo spoke about the legal hurdle he faced before he ascended the throne on 8th April 1990, and thanked God for seeing him through and keeping him alive to celebrate 25 years on the throne.
The monarch, who also spoke on the issue of creation of Ijebu State, said the Remo people predicated their support of its creation on the condition that “the capital will be placed at Ikenne Remo towards Odogbolu”.
Also present at the event were a former President, Chief Olusegun Obasanjo and the Ogun State governor, Senator Ibikunle Amosun.
Obasanjo said the Remo people and the Egba people “are brothers and relations” and thanked the Akarigbo for supporting his administration while he was president.