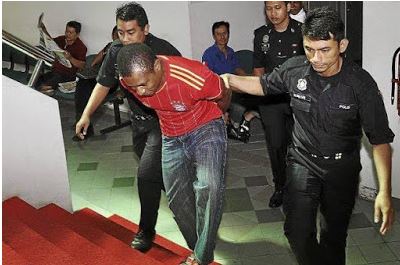 A Malaysian court has ordered the detention of five Nigerian students in Malysia for their alleged involvement in a N125.2m (RM2.4 million) internet fraud in Selangor & Kuala Lumpur, Malaysia.

According to local media reports, the 5 Nigerian students who are between the ages of 20 and 30 are undergraduates pursuing a degree in Information Technology in a leading University Kuala Lumpur. They were arrested on June 30, 2015.

A Malaysian police chief ACP Azmi Adam while speaking on their arrest said two women have been arrested for providing their bank accounts for the syndicates to use in doing their illicit business. He stated that five laptops, 20 hand phones, ATM cards, SIM cards and documents believed to have been used to con their victims were seized from the men.

The men were arrested after one of their victims, a 62-year-old businessman alerted the police after receiving a suspicious email in March informing him that he was among 50 recipients selected to receive RM15.9 million from the government of the United States.

“The e-mail requested the victim to follow certain procedures to ensure he did not miss the opportunity. Convinced by the contents of the e-mail, the victim carried out 51 transactions involving money, to accounts numbers given by the syndicate before realising it was a scam. He later lodged a police report,” the police chief said.