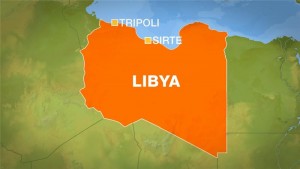 India has said that four of its citizens have been kidnapped near the Libyan city of Sirte. Sushma Swaraj, India’s foreign minister, briefed Prime Minister Narendra Modi on the incident on Friday, according to the online edition of the Times of India. Aljazeera was there:

Vikas Swarup, a foreign ministry spokesman, said that all four had been returning to India through Tripoli when they were detained at a checkpoint about 50km from Sirte on Thursday evening. “We are in regular touch with their families and all efforts are being made to ensure their early release,” Swarup was quoted by NDTV’s website.

NDTV reported that two of the kidnapped Indians were from Hyderabad, one from Raichur, and one from Bengaluru. All four of them had been teaching at Tripoli University for a year, the foreign ministry said.

No ransom demand has been made yet, according to the ministry.

Indian media reported that the four were kidnapped by armed rebels linked to the Islamic State of Iraq and the Levant (ISIL). More than a year ago, at least 39 Indian citizens were reportedly kidnapped in Iraq’s Mosul. The incident was blamed on ISIL, but the group never issued a claim of responsibility.