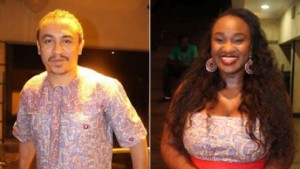 In the interview, he spoke honestly about his estranged wife and what went wrong in their relationship.

The father of two has called his wife names and claims that she physically assaulted him several times, and explained why he has been on a bashing campaign of his wife Ope on social media.

“I am not perfect, not even near, but I will not take blame for a crime I didn’t commit and won’t allow my name to be destroyed by this woman” Freeze said. “Ope was raised by a single mother who had seven children from three different fathers. Everyone discouraged the relationship pointing out her mother’s situation and warning me that this might lead to a character flaw in Ope but what did I know?

“I was in love. By the time I understood the enormity of the damage done to her by her upbringing, it was already too late and she was pregnant with our first child. I decided to get married to Ope turning a deaf ear to numerous warnings of the consequences of such an action.

“From the first year of marriage I started seeing her true character. She talked without any respect whatsoever and would fight me and hurl curses like a market woman, while saying to me “it is better I curse you and hit you than for GOD to strike you!” My parents have been married for 40years and I believe that divorce should never be an option. So I endured the violence.

“Adultery is one of the most difficult things to prove but if a married woman keeps late nights, has unwholesome friends, comes home tipsy regularly and she makes calls to strange men at ungodly hours within her husbands home eyebrows will definitely be raised. There was this one time I went to the UK for work. I sent my assistant with a cheque to my house at midnight and she wasn’t home,she had dropped the kids with my sister and disappeared into the night!

“What about the time she saved a mans number under her female friends name  sometime in 2007 and we had a huge fight about it, leading me to almost end the marriage at that time. It has never been my intention to call her out on social media and if you remember clearly I avoided making any comment initially since it’s an embarrassing situation for both of us and the children already, however she is hellbent on destroying everything I stand for just to make herself look good. This has left me with no other option than to speak the truth!“

Yesterday, Freeze released pictures of him with bruises and cuts. In the interview he says his wife was behind the beatings.

“Ope beat me up black and blue. I have received beatings from someone who was supposed to be my better half and a weaker vessel for little or no provocation. I was once attacked physically while on the phone with one of my biggest clients and the client listened through the attack that left me badly injured.

“Several of my friends have witnessed her attacks. She is a very jealous and possessive person and believes the best way to stop a man from cheating is to embarrass him before any potential threat.

“She is also very insecure as a result of her upbringing and is suspicious of everyone and everything.“

Moving on he revealed when his marriage broke and why he couldn’t save it.

“My marriage crashed like 6 or 7 years ago. In her bid to have absolute control Ope severed ties with my family. She created such a hostile environment that my family avoided visiting as much as possible. In order for me to have a happy home I had to do as she pleased or else all hell would be let loose. I wasn’t the perfect husband myself making a few mistakes here and there but I always believed we could work on our issues if we stuck together.

“The straw that finally broke the camels back for me was when she lashed out at my mother, attempting to slap her in the presence of my father and I because my mother dared question her coming home at 11.30pm leaving the children without dinner.

“To me that was the highest form of insult a man could ever take and I felt I had failed my family if that was the best daughter-in-law I could provide for them. I still stayed on in the marriage for the sake of the kids but my heart and soul had departed.

“Even after she packed out of our matrimonial home I tried to send my sister after her to plead with her just for the sake of the children but she refused. Like 6months before she packed out she changed jobs to her present company Seadrill limited without even informing me. I found out because her ID changed and up until today I don’t know where that company is” said Freeze.

Freeze admitted that since his separation from his wife, he has been seeing a new woman. He however dismissed reports that she is older than him and has four kids.

“Yes I am in a relationship but let me squash the rumor. she is not an older woman, she is a lot younger than I am and she does not have four children. I didn’t start dating her until three or four months after Ope deserted our matrimonial home leaving me in a severe state of depression. She has been wonderful to me, gave me a shoulder to cry on and picked me up from the mess I was in. My family adore her and her family is really cool with me and I am praying to GOD that she will be my last bus stop.

“Ope has prevented me from seeing my kids for over a year now. I remember picking my son up from school last year and she drove to my house with thugs in her car, barricaded my gate and started screaming to attract the neighbours that I wanted to kidnap her son.“

The veteran on-air-personality says he no longer loves his wife and has moved on from the toxic relationship. “Yes, I loved her but that was a very long time ago. Her destructive spirit killed the love a long time ago. It grew to anger, hatred, bitterness and my current state of indifference towards her. She had a friend that was kicked out of her marriage because she was caught with juju.

“This same friend made sure that she ended Ope’s marriage and I am leaving that friend to GOD! I suffered so much in the hands of this woman I was so depressed that I was almost suicidal. A friend of mine advised me to go into sports to maintain my sanity but I absolutely detest sports.

“The only sport I can tolerate is Formula1. I went to watch a race and Oris watches were advertised so I bought one. I had always loved watches but on a much smaller scale. I started with brands like Oris, Tissot, Rado and Raymond Weil then I graduated to the bigger dogs. I used to stay up all night researching on wristwatches and searching for the best service centre etc What started as a hobby to battle my depression has fast become my greatest passion!

“I am over this relationship with Ope, I wish her all the best in life as I have long  moved on. I have an amazing woman in my life and a couple of weeks ago we were blessed with an adorable son!

“I use this as a medium to beg her to allow me access to our children something she has totally denied me for over one year! She should be advised to be careful with the kind of accusations she makes because they could ultimately be damaging to the reputation of her children’s father. I never draw first blood, I have always reacted to what she did never the other way round.

“This is my closure,i don’t need any counselling.“