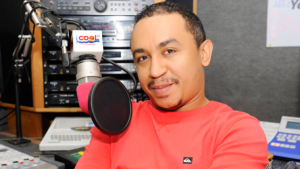 Controversial OAP, Freeze, has continued to paint himself as rude and arrogant to any and everyone who care to see him in that light.

After the nasty back and forth trade of words with his estranged wife last week, his new utterance is sure to make the news again.

Speaking about Nigerian DJs, the radio presenter took shots at them, saying most of them are tone deaf.

“Most of the other deejays are deaf and dumb, some of them cannot communicate except through sign language, mixing their hands in gesticulations of sorts” said Freeze.

He went on to praise his colleague, DJ Xclusive.

He made this statement at the launch of DJ Xclusive’s debut album on June 28, 2015.