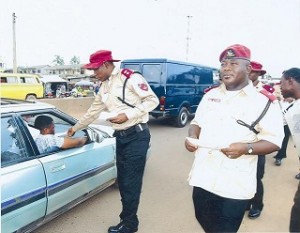 The Conference of Directors/Chief Vehicle Inspection Officers (VIOs) of the Federation has alleged that the Federal Road Safety Commission (FRSC) is responsible for the issuance of fake driver’s licence to motorists, a situation it blamed for the rising cases of road accidents across the country.

Deputy National Chairman of the conference, Alhaji Garba Abdu Gaya, who spoke to newsmen in his office on Tuesday asked that the current tripartite arrangement in the issuance of driver’s licence be reviewed, noting that more than 50 percent of the licences motorists are parading in the country are fake.

The current procedure stipulates that an applicant for driver’s licence should pay at a state board of internal revenue, the VIOs are to train the potential driver while FRSC is to issue the licence.

“There was a case of one VIO who died since February 2006, but we came across some licences issued in 2013 with the signature of our departed colleague. This is too outrageous,” Gaya said.

“We are doing our search for the fake licences’ originating points, with the help of police. So far, we have a lot of cases reported to police on this disheartening issue of fake licence. Officials of the FRSC are allegedly deeply involved in the issuance of such fake licences.”

The deputy national chairman of VIOs therefore called on the Federal Government to take road safety officials off the roads within metropolitan areas. “They come under Exclusive Legislative List, Item 63, which affects Trunk A Route only, that is federal highways. So, they don’t have any business working on metropolitan roads,” Gaya argued.

“State governments should be up and doing in making sure that any applicant for driver’s licence is first trained by VIO before any other thing takes place.”

Responding to the allegation, the FRSC said the VIO conference was shifting blame to the wrong quarters.

According to the Public Enlightenment Officer of the Kano Sector Command of the FRSC, Kabiru Daura, licences are not issued without following some laid down procedures …and the work is not tripartite.

“You can go to any licence office, you will find out that there are officials from our office, VIO office and the state board of internal revenue. Before any licence is issued, it is the duty of the VIO to certify to the board of internal revenue that an applicant has been certified to have a driver’s licence. It is after that the board will write to us, authorising us to issue a licence,” Daura explained.