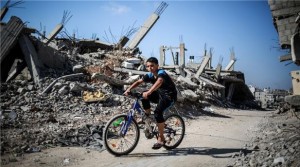 The people of Gaza are marking a year since the Israeli air raids that heralded the start of a war that left 2,251 Palestinians dead and thousands more wounded.  The anniversary on Wednesday of last summer’s war comes as the besieged territory struggles to rebuild its infrastructure, and tens of thousands of its people struggle to access basic amenities.

Al Jazeera spoke to Palestinians who said little was being done to help them recover and go on with their lives. One survivor, Ibrahim Abdeldaem, lost his legs in an Israeli air strike while his family was sheltering at a UN school in Gaza City. His father and brother were killed in the attack and one year later he said he had no hope that his life would get any better.

“I am completely destroyed. I’ve lost my legs. I’ve lost my job. I can’t leave Gaza because we are under siege on all sides. All I want is at least one artificial limb to feel like a normal person again,” Abdeldaem said. More than 12,000 homes were destroyed in the war and 100,000 damaged.

International donors including the US and Arab Gulf countries have pledged more than $5bn to help rebuild Gaza. Israel’s economic siege, which has lasted for years, means badly needed construction materials like cement have not been allowed in, despite offers by the United Nations to oversee the process.