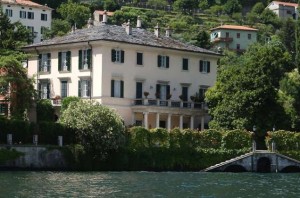 Unconfirmed reports say that Hollywood star, George Clooney is planning on selling his Lake Como estate in Italy over concerns of constant disturbance from paparazzi.

George Clooney is considering to let go of the mansion for $100 million at the end of the summer as paparazzi are constantly photographing him and his wife, Amal.

The 18th-century Villa Oleandra, which he bought from the Heinz family in 2002, is reportedly worth $10 million and became a subject of sale after photographers recently caught George and Amal saying farewell to Robert De Niro after he and wife, Grace Hightower came over for dinner.

In April, it was reported that Laglio’s Mayor, Roberto Pozzi put a $550 fine on anyone caught snooping within 300 feet of the property of the Oscar winner’s villa and Villa Margherita next door, which Clooney also own.

A source told Page Six that “George loves the area and the people who live there, but is conscious of the attention he gets when he is in town. He has received a huge offer for the villa, which he is considering, and he would buy another, less accessible property in another area of Italy.”