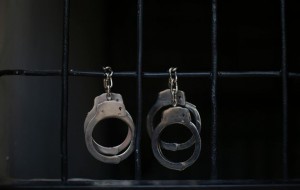 The Osun State Command of the Nigeria Security and Civil Defence Corps has arrested a herbalist, Babatunde Awofadeju, for allegedly tricking a contestant to a royal stool to part with N420,000. Armed officials of the NSCDC stormed the herbalist’s shrine at the Ogunda area of Ogbagbaa, on the way to Iwo, from where he was arrested and taken to Osogbo. Punch Metro reports:

It was gathered that the intention to include Inaki- igboro ─ which means human beings ─ in the sacrifice made the prince to alert the NSCDC which arrested Awofadeju. Awofadeju, a native of Ilesa, said he started defrauding people after he was duped when he was into cocoa trade.

He said, “I started this herbalist work about eight years ago after I was duped by some people when I was into cocoa trade in Ilesa.”   He said he used his sales representatives, who hawked concoctions, to bring him clients. The Commandant of the Osun State Command of the NSCDC, Mr. Tajudeen Balogun, said Awofadeju would be charged to court very soon.