He’s A Dirtbag: 25 Telltale Signs You Have A Sh*tty Boyfriend 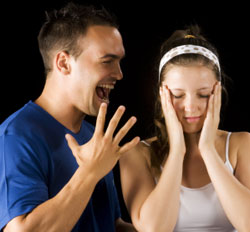 He’s annoying when he loses his keys for the 10th time, but there are certain things your boyfriend does that you shouldn’t let slide.

If your boyfriend or significant other is doing any of the following, it might be time to rethink your relationship:

1. Making you feel bad about being yourself

So you like to randomly speak in accents and you really like buying office/school supplies. He needs to be okay with your little quirks.

2. Going a whole day without saying “I love you”

It’s not that hard to say at least once a day.

3. Not having any explanation when you confront him for not saying, “I love you”

If he doesn’t have a reason for not letting you know you’re special, there’s something wrong.

4. Making you feel like it’s inconvenient to spend time together

If he’s constantly too busy to see you, you’re too fabulous to wait around for him to become available.

5. Trying to keep you from away from things you love

Whether it’s time with your sorority sisters, going to concerts or crafting, the activities you enjoy are important and you should never be served an ultimatum that forces you to choose between your passions and him.

6. Not offering to pay for anything… at all… ever

Some couples like to split things more often than others and that’s fine, but if you’ve never once heard, “Babe, let me take care of it,’’ that’s not okay.

7. Shutting you up when you try to explain why you’re upset

You should never feel like you can’t talk to him about something he’s done that hurt you.

8. Continually neglecting to hold your hand in public

You should be able at least remember the last time it happened.

9. Never offering to hold a door open for you

He doesn’t have to open every door in the world for you, but you shouldn’t be able to count on one hand the number of times it’s happened.

10. Putting your dreams down

Whether they involve school, your career or a hobby you’re passionate about, he should never make you feel like you can’t or shouldn’t chase the things you love.

11. Sitting everywhere but next to you

Especially when you’re watching a movie

12. Refusing to apologize when you two have a spat

That doesn’t mean that you don’t have to apologize, too, but nine times out of 10, both of you owe the other one an apology.

13. Dictating what you’re allowed to do

You should not feel like you have to ask for permission every time you want to go somewhere or do something. Spending the day with your girlfriends is a right you have, not a privilege your boyfriend grants you.

14. Yelling at you for things that are definitely not your fault

Like the fact that he has been looking for a whole two minutes for a parking space.

15. Taking hangry to an extreme

We’re all guilty of being grumpy when we need food, but that’s not an excuse for him to treat you like dirt.

If you need a little comfort because you’re worried about getting a job or think your best friend is mad at you, he shouldn’t be mocking your concerns.

17. Constantly trying to prove he’s smarter than you

A relationship is not the final round of “Jeopardy: Genius Edition.”

Sure, your little brother might be a pest and your mother might be controlling, but there’s no excuse for him to disrespect them.

19. Refusing to buy you any kind of gift because he doesn’t “know what you like”

This is not a legitimate excuse for never giving you a birthday present, a small token in celebration of an anniversary or a candy bar because you’re having a bad day.

20. Not standing up for you

When a stranger or even one of his friends crosses the line and disrespects you, he needs to be right there, letting them know it’s not okay.

21. Making you feel guilty for spending time with anyone other than him

He might be your one and only, but he’s not the only person in your life who you value having a relationship with.

22. Downplaying your success because he’s jealous

When you do well, he should be celebrating with you, not minimizing your accomplishments because he’s envious that you’ve done something awesome.

23. Constantly backing out of plans

Sometimes things come up, but if you make plans far in advance, he shouldn’t always be the reason the two of you never follow through on them.

24. Promising to do something with no intention of keeping it

Can you control his behavior? No, but if he’s promised you since the day you first started dating that he’ll quit dipping, two years later, his life shouldn’t still be littered with tins.

25. Refusing to accept any physical or mental challenges you face

Perhaps you’re in your 20s, but you have arthritis or maybe you’ve been struggling with panic disorder since age 9. No matter what obstacle you face, he should be willing to try to understand these challenges in order to support you.

Social media guru, Reno Omokri is of the opinion that people should quit celebrating their birthdays as it makes no sense. According to the author...
Read more

A British lady who lost her husband to her own mother who then had a child for him has said she will never forgive her. The...
Read more

Why Society Frowns At A Cheating Wife, By Comedian Ali Baba

Popular humour merchant, Ali Baba has taken to his official Instagram page to reveal why married women are frowned at when the cheat. According to...
Read more
- Advertisement -