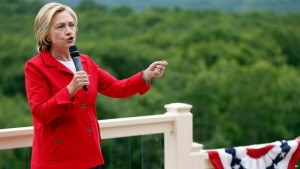 US Democratic presidential hopeful, Hillary Clinton has accused China of stealing commercial secrets and government information. She accused China of “trying to hack into everything that doesn’t move in America”, and urged vigilance. BBC has more:

US officials had named China as the chief suspect in the massive hack of the records of a US government agency earlier this year.

China had denied any involvement, and called US claims “irresponsible”. Speaking at a campaign event in New Hampshire, Ms Clinton said that China was stealing secrets from defence contractors and had taken “huge amounts of government information, all looking for an advantage.”

She added that she wanted to see China’s peaceful rise but that the US needed to stay “fully vigilant”. “China’s military is growing very quickly, they’re establishing military installations that again threaten countries we have treaties with, like the Philippines because they are building on contested property,” she said.