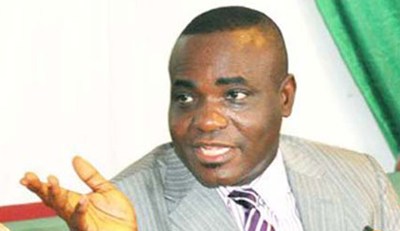 Enang, an All Progressives Congress chieftain, made the appeal in an interview with journalists in Abuja.

According to the ex-Senator, the election of the presiding officers of the Senate and House of Representatives followed due process, but urged all parties to sheath their swords and put the issue behind them.

He also appealed to the APC leadership to guard against utterances over the National Assembly crises and allow the lawmakers to settle their differences in their own way.

Enang, who is the immediate past Chairman, Senate Committee on Rules and Business, said Nigerians are not interested in who emerges as the presiding officer of the Senate or House of Representatives, stressing that their concern is whether the federal parliamentarians were doing what could affect their lives positively.

He said, “I will urge the leaders of the APC and other eminent citizens to prevail on President Muhammadu Buhari to step in because he was elected as president of Nigeria to take the honour, to take salute, to take praises, to be protected, to drive and be protected by siren.

“He was also elected by Nigerians to take insults. If any of these matters happen in a manner that is considered that it is not respecting the party, let us please accept that the part of the duty of a leader is also to take the glory and also to take blame.

“I want Mr President and all the parties in this matter to please come in because he is the commander in chief who commands the Armed Forces and the political forces.

“Let him come in, intervene as a leader, let him just lift his hands and say, ‘peace be still’ and then put the house and everybody back together”.

Enang noted that Buhari was still enjoying the popular support and acceptance from Nigerians, hence the federal lawmakers would listen to him and abide by his peace moves.

He said, “Nigerians respected him and voted for him, he will be sure that Nigerians and the legislature, all the aggrieved sides will listen to him and abide by whatever he says.

“Anything that has happened in a manner that was not contemplated as a leader, he can caused it to be absolved, bring it to be part of what the party stands for, and then the country can go on.

“He should also take steps to make sure that no leader of the party make statements that incite one section against the other because this is how the PDP problem also started. Let us have one APC, one Nigeria and one government under president Buhari”.