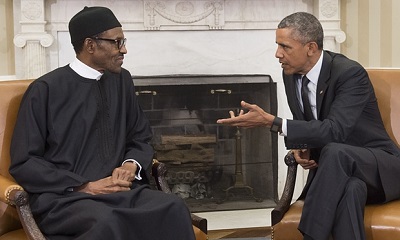 The United States Government has agreed to assist Nigeria recover all identified ill-gotten wealth within the U.S., and from other nations where it has jurisdiction, the Nigerian Presidency said Tuesday.
The U.S government will also assist in capacity building programmes for Nigerian judicial staff and prosecutors as part of efforts to tackle corruption in Nigeria.
The assurances emerged from a meeting between President Muhammadu Buhari and the United States Attorney-General, Loretta Lynch, on the subject of support for the war on corruption in Nigeria.
According to a statement by the Senior Special Assistant to the President on Media and Publicity, Malam Garba Shehu, the two nations agreed that the Mutual Legal Assistance Treaty signed between the two countries in 1985, which came into effect in 2003, be given some teeth.
“There will be collaboration. Each of the two countries will receive legal assistance from the other on criminal matters and that should cover the recovery of ill-gotten wealth. On extradition, we already have a treaty with U.S. By virtue of being a former British colonial territory”, the statement said.
“There is however the possibility that Nigeria might negotiate a new extradition treaty to meet our other requirements. The negotiation will be done under the auspices of a ‘reenergized’ U.S-Nigeria Bi-National Commission”.
President Buhari is presently on a four-day official visit to the U.S. where he met with President Barack Obama and Vice President Joe Biden on Monday.
The American VP assured of the goodwill of his country in rebuilding the Nigerian economy, but observed that corruption and weak institutions must be tackled, if Nigeria was to benefit from any reform programmes.
Mr. Biden also advised President Buhari to appoint only seasoned technocrats to manage key sectors of the Nigerian economy.