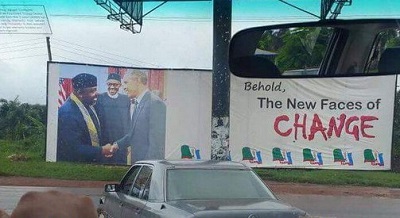 The Imo State Government has reacted to the giant billboard screen and flex billboard banner adorning some strategic locations in the state showing Governor Rochas Okorocha in a handshake with President Barack Obama, during President Muhammadu Buhari’s recent official visit to the United States.

The image, which has gone viral, became the butt of jokes on the social media with many lambasting the Imo State Government for wasting public funds on erecting billboards of Okorocha’s handshake with Obama and tagging it “…The new faces of change”.

But reacting to the development, the Imo State Government called on the general public, who had seen or who will see the photographs to discard them, as it did not emanate from official quarters.

Gov. Okorocha pointed out that he did not place the photographs on the referenced screen or billboards, neither was he aware or informed before they sprang up in the state, therefore, he could not have authorized anybody or any group to do that since as it was totally unnecessary.
In a statement signed by Sam Onwuemeodo, his Chief Press Secretary, Okorocha said at the level he had reached before becoming governor in 2011, he would not have authorized anybody to begin to advertise or display his photographs with the American President.

“We had done our investigations and had discovered that some politicians in the state did that and they had done it with good intentions without their knowing the implications since they are not experts in public relations. They had thought that by doing the adverts they were going to impress the governor. And we can understand that. The government has however told them to put a stop to that”, Onwuemeodo said.

“We are aware of the fact that Imo people love their governor and do certain things to appreciate him, but they should please be thorough enough, by informing the government to avoid playing into the hands of habitual opponents”, it said.

It further stated that while it was a good thing that President Buhari in his magnanimity included the governor in his team for the visit to President Obama, Gov. Okorocha had got to a level that he could not have allowed the adverts in question if informed.