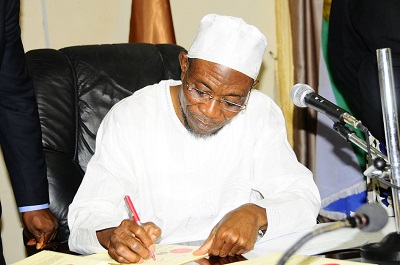 Governor Rauf Aregbesola of Osun State has responded to the petition written against him by a serving judge in the state, Justice Folahanmi Oloyede.
The Speaker of the State House of Assembly, Mr. Najeem Salaam, said this in a statement issued on Wednesday by his Chief Press Secretary, Mr. Goke Butika, in Osogbo, the state capital.
Oloyede, in a petition to the state House of Assembly, had accused Aregbesola of financial recklessness and asked the lawmakers to commence impeachment proceedings against him.
The Speaker, who had earlier confirmed that the Assembly had forwarded the petition to the governor for his response, said the lawmakers could not do anything until they received a response.
The statement read in part, “Osun State House of Assembly has expressed its readiness to address the petition sent to it by a judge of the State High Court, Justice Olamide Folahanmi Oloyede, having obtained the response of Governor Rauf Aregbesola on the matter.
“The detailed response of the state helmsman was obtained on Tuesday, compelling the parliament to set machinery in motion on the investigation of allegations of financial hiccups and her position for the preparation of impeachment article against the governor, among other issues.
“The parliament would be fair and thorough in investigating all the issues raised with a view to reaching a logical end that would give all parties concerned sense of justice without fear or favour.
“I have constituted an investigative committee that will look into the petition forwarded by Justice Oloyede, and I have given the committee the mandate to interact with Justice Oloyede in person.
“Justice Oloyede is in the best position to further shed light on her position as expressed. However, I assure all the parties concerned that the matter would be treated with fairness and sense of justice without fear or favour”.