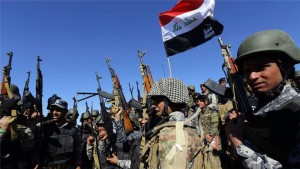 Iraqi troops backed by mainly Shia militias have launched offensive to recapture the Anbar province from Islamic State of Iraq and the Levant (ISIL), a military statement broadcast on state television said. Aljazeera was there:

The announcement of the offensive comes two months after ISIL seized Anbar’s capital, Ramadi, extending their control over the Sunni Muslim province west of Baghdad. “At 5 o’clock this morning operations to liberate Anbar were launched,” said a joint military command statement read out on state television.

It said the offensive was being carried out by the army, mainly Shia militia known as Hashid Shaabi (Popular Mobilisation) units, special forces, police and local Sunni Muslim tribal fighters.

The statement gave no other details, but military officers and Hashid Shaabi commanders have said the initial target will be the city of Falluja, about 50 km west of Baghdad.