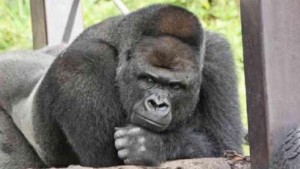 Meet Shabani, a handsome male gorilla that has managed to steal the hearts of young women all over Japan. He is fondly known as ‘ikimen’, a Japanese term for ‘good-looking man’, and some have even hailed him as the animal-world equivalent of George Clooney or Hugh Jackman! Oddity Central has more:

Shabani, who grew up in an Australian zoo, has been living at Higashiyama Zoo and Botanical Gardens in Nagoya, Japan, since 2007. The western lowland gorilla is blessed with a shiny black coat and a macho brooding expression that make him very photogenic.

In fact, his photos have gone viral on Twitter, where fans have shared them thousands of times over with comments like: “he’s too handsome!”

“He is more buff than most gorillas and he’s at his peak physically,” zoo spokesperson Takayuki Ishikawa told the media. “We’ve seen a rise in the number of female visitors – women say he’s very good-looking.”