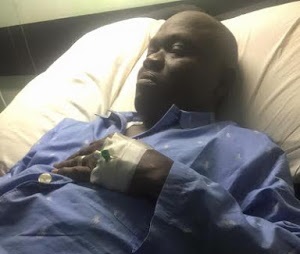 Friends of the former CSO, who released an undated photo on Facebook showing Mr. Gordon purportedly on a hospital bed, claim he has continued to suffer both physically and mentally and has been in great pain since July 21, 2015 – the day he was released by the Department of State Service after spending about four days in their custody.

Mr. Obua is an operative of the DSS.

His friends also claim his abdomen is swollen and he has great difficulty moving around.

Meanwhile, family members are reportedly making plans to fly Mr. Obua abroad for a more accurate evaluation and treatment as advised by his family physician.