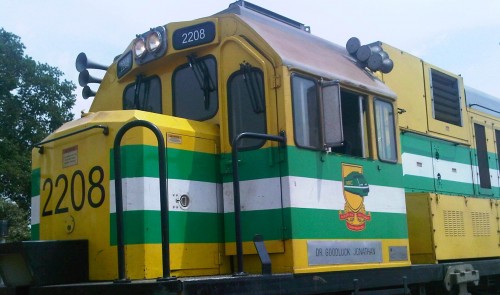 The railway revitalization project of the Federal Government has begun to yield results twelve years after it was launched with the commencement of train services from Kano in the North to Port Harcourt, the Rivers State capital.
The mixed service train will depart Kano every Thursday for Port Harcourt and a return trip thereafter every Tuesday.
Commissioning the new train services in Kano on Thursday, the Managing Director of the Nigeria Railway Cooperation (NRC), Adesiyi Asijuwade, expressed joy at the development in view of the fact that the first Kano-Port Harcourt mixed train services was in 1914.
However, in view of the ongoing efforts by the NRC, train services are now being resuscitated in phases across Nigeria.
To make the experience a pleasant one, two 68-seater air conditioned modern first class passenger coaches had been put in place to traverse a rail distance of 1,139 kilometres, stretching from Kano to Port Harcourt, with stops at some cities across Kano, Kaduna and Benue among other states in the south.
Governor of Kano State, Abdullahi Ganduje, represented by Speaker of the State House of Assembly, Alhassan Doguwa, assured the corporation of the State government’s continued support and patronage.
Speaking at the commissioning ceremony, the Emir of Kano, Alh. Muhammadu Sunusi II, urged the management of the NRC to ensure continuity of the train services at an affordable price in order to allow free flow of economic exchange between the south and northern parts of Nigeria.
“We are indeed happy that train services from Kano to Port Harcourt have returned and we pray that Allah will ensure the continuity of the program and may it be a source of our economic strength”, the Emir prayed.