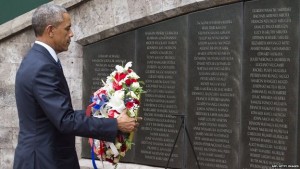 The US president has urged Kenya to hold “visible” trials to tackle corruption, which he said could be the “biggest impediment” to further growth. BBC was there:

After talks in Nairobi, President Obama and Kenyan counterpart Uhuru Kenyatta said they were “united against terrorism” and efforts to deal with it. But the two leaders differed sharply in their positions on gay rights.

“Africa is on the move… People are being lifted out of poverty, incomes are up (and) the middle class is growing,” he told a business summit. He also visited a memorial for those killed in the 1998 US embassy bombing. The trip, which began on Friday, is Mr Obama’s first visit as president to the country where his father was born.