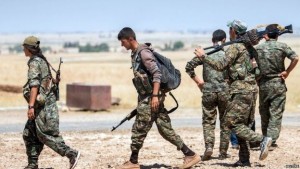 The Turkish president has said that Turkey cannot continue the peace process with the Kurds amid attacks by Kurdish militants on Turkish targets. It came as Nato discussed Turkish campaigns against the Islamic State (IS) group and Kurdish militants.

BBC reports that Turkey has been hit by a series of attacks – including 32 killed by IS-linked militants in the Kurdish-majority town of Suruc on 20 July. Turkey is backing plans for a buffer zone on the border with Syria.

As well as targeting IS militants, the zone would also allow Turkey to hit positions held by the outlawed Kurdish PKK group.

Turkey says it draws no distinction between the PKK and IS, considering them both terrorist organisations. Over the past week, analysts say, Turkey has turned its approach to the US-led coalition against IS on its head. Previously a reluctant partner, it is now flying combat missions and making its airbases available to US jets.