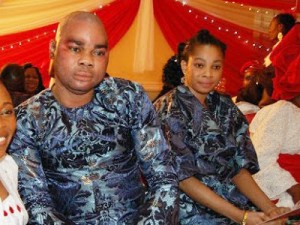 Wife of the deceased Prophet Ajanaku, Ireti Ajanaku has revealed that her husband who died three years ago is still alive.

Ireti said though her husband is gone but his spirit still lives on.

On how she have been coping without her husband, Ireti told City People that: –

“I thank the God of Elijah Ireti Ajanaku, He has been the one behind my strength. He has been the one behind me. If not for Him, I would have been forgotten and everything about my husband, Prophet Elijah Ireti Ajanaku would have been forgotten. But His grace has been keeping me moving; ever since his body slept in the lord I believe he is much alive. I believe his spirit is much alive, but its only his body that slept.  It is God that has been sustaining me. I thank God for his call over his life. If not for the fact that God called him and he is a man of God, I don’t know what would have befall his Ministry, I myself and the children and everybody he left behind. But I thank God that called him. He has been the one sustaining us.”

Ireti also told the reporter that she talks to her husband daily.