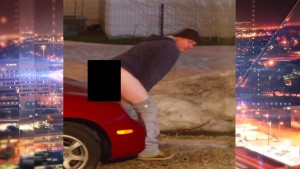 For the past three years, residents of a quiet Akron, Ohio, neighborhood say they’ve been terrorized by a man defecating on cars and even children’s front yard toys. But early Wednesday, a diligent neighbor who set up a time-lapse camera managed to catch the suspect with his pants down — and turned over the photographic evidence to police. Akron authorities have released the image of the so-called “Bowel Movement Bandit,” who they say has pooped on at least 19 parked cars in driveways in the city’s Castle Homes neighborhood. The resident who set up the cameratold NBC affiliate WKYC that the suspect has struck the family’s car at least eight times since the fall. “I was questioning my son: Who do you have mad at you?” said the resident, who did not want to be named.

According to Agnum Reports, “People were pointing fingers all over the place.” advertisement Another resident pooh-poohed the man’s behavior as disturbing and bizarre. “My mother-in-law walked out of our house one day, and the kids’ front-yard slide had to be sanitized,” Rob Brunson told WKYC. He added that neighbors have been playing the “blame game” for months, casting suspicions on one another.

But the photograph of the suspect in the act has relieved residents and offered a break in the case. “The photo shows this guy bent over on the hood, pants to ankles defecating on the car,” Akron police Lt. Rick Edwards told the station. “We need to know who this person is. “Police in Akron, Ohio are searching for this man who was caught by an eyewitness defecating on 19 parked cars in driveways between 5:30 and 6:30 a.m on March 12. Akron Police Department.