Home National News Odd News Man Offering $10,000 To Anyone Who Can Find Him A Girlfriend
Facebook
Twitter
WhatsApp 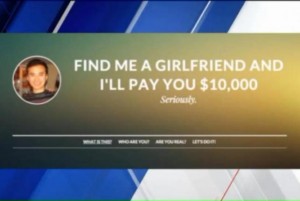 An Alabama man is offering $10,000 to anyone who can set him up on a date that leads to a relationship lasting at least six months. Ren Lu You, 29, of Birmingham, said he created DateRen.com after going on 30 dates during the last 10 months that failed to result in a happy relationship. Scoop has more:

You’s website has an entry form for people seeking the $10,000 prize to submit names, biographies and photos of potential girlfriends for You, a Harvard graduate who works as a private equity associate.

He said the person who connects him with a woman who becomes his girlfriend for at least six months will receive the prize. “It’s pretty simple,” the site says. “I save a ton of time on finding romantic prospects and going on bad dates. You make a bunch of money for something you might have done for a friend, just for fun.”

You admits his scheme is “weird.” “But look at it this way: if you work 12 hours/day, how would you want to spend the few waking hours you have left? Probably not standing around in a bar with your fingers crossed. This is way more fun for me,” he wrote.