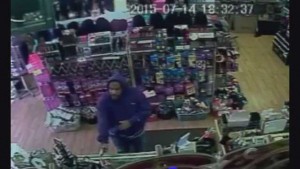 Police say a man shown in a surveillance video trying to rob a New Jersey business later watched the recording online and turned himself in. The Huffington Post has reported.

Trenton police Lt. Stephen Varn tells NJ.com (http://bit.ly/1Kblz72) that Dwaine Whitaker appeared on surveillance video trying to hold up a business at gunpoint on Tuesday. Whitaker turned himself in Friday.

Authorities say a friend told Whitaker about the video and he turned himself in after watching it.

Whitaker has been charged with armed robbery and weapons offenses.

Attempts to reach an attorney for Whitaker for comment have been unsuccessful.